What is an Excitation System?

Excitation systems are fundamental to the operation of modern synchronous machines. In this article, we introduce the basic concepts in layman’s terms. 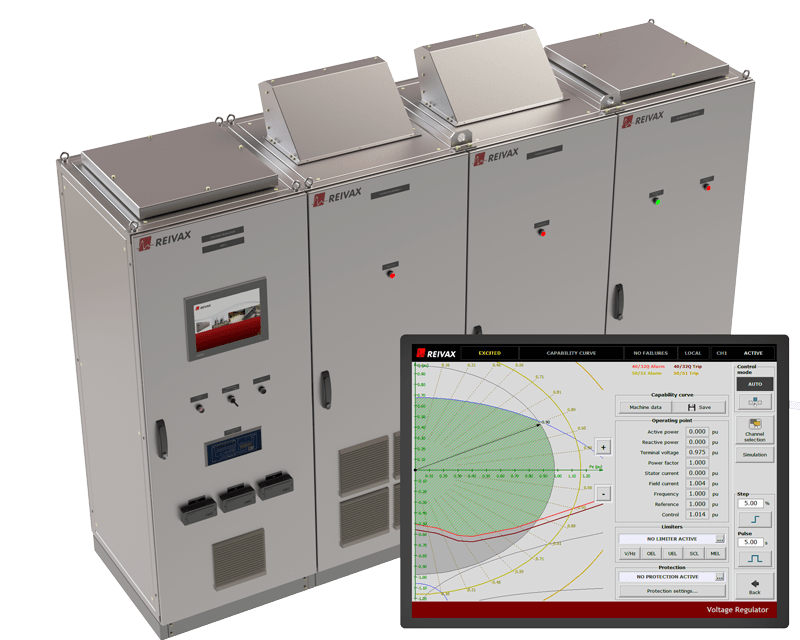 WHAT IS AN EXCITATION SYSTEM?

The basic function of an excitation system is to provide a continuous (DC) current to the field winding of a synchronous machine. This is achieved through the use of closed-loop control (or feedback control). Modern excitation systems also include diagnostics functions to simplify troubleshooting, communication protocols for SCADA integration, and limiter / protection functions to ensure that the synchronous machine is operated within its capability curve.

The objective of an excitation system depends on the application:

Excitation systems use closed-loop or feedback control to regulate the machine’s output. In closed-loop control, the machine output is routed back to the controller and compared to a setpoint, and the error between the setpoint and output is used to compute the system response. The controller is typically modeled as a PID, PI or lead-lag controller.

The tuning parameters associated with the control loop can easily be modified directly from the HMI.  Three (3) sets of tuning parameters, allows for tailoring the optimal response for when a generator is not connected to the grid and for grid-connected mode depending if the Power System Stabilizer (PSS) is active or not : 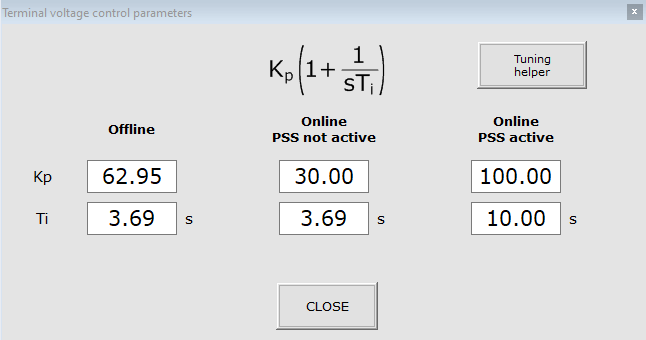 A sample diagram of the full control loop is shown below: 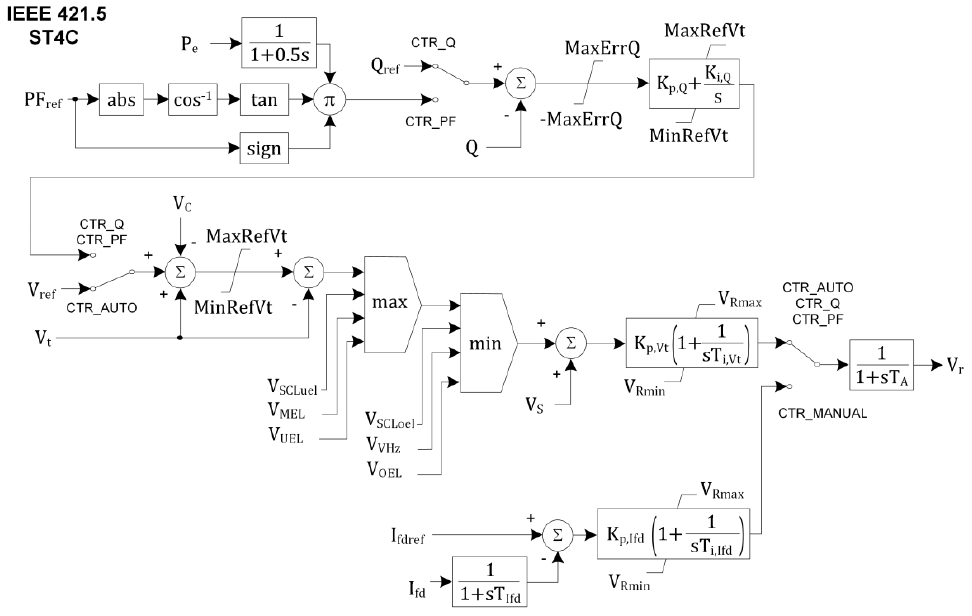 The most common limiters and their functions are given below: 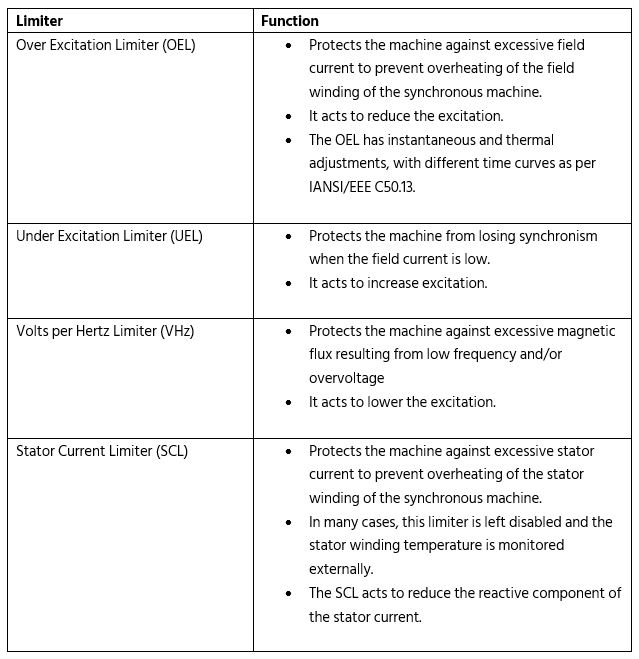 For excitation systems manufactured by Reivax, limiters can easily be configured from the HMI. The simplified transfer function and configuration screen for the OEL is shown below corresponds to IEEE 421.5 OEL2C. The OEL is configured as an inverse-time characteristic curve as per IEEE/ANSI C50.13.

The simplified transfer function and configuration screen for the UEL is shown below. The UEL is configured as a piece-wise linear characteristic in the underexcited region (negative reactive power) of the capability curve as per IEEE 421.5 UEL2C. 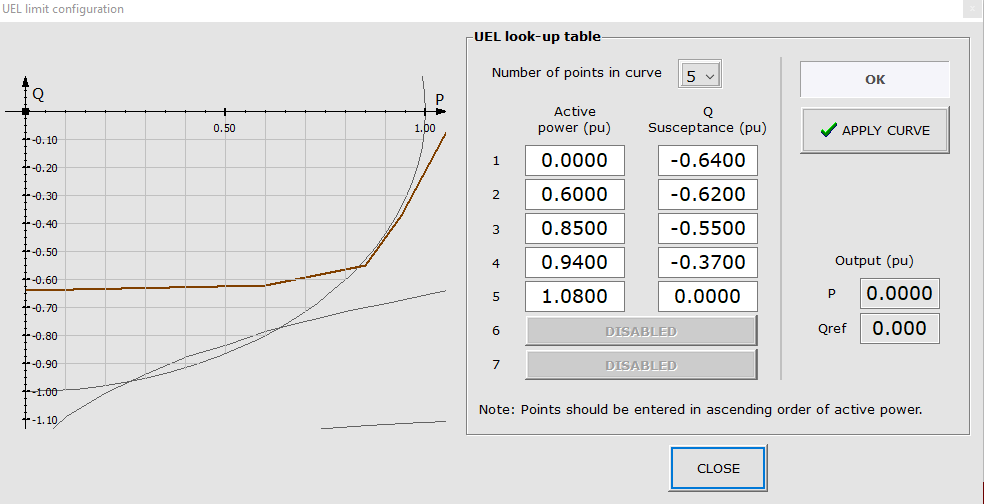 Coordination between limiters, equipment limits and external protection relays is an important aspect of proper excitation system integration. Typically, coordination is performed as part of a protection study or model validation study, with the settings tested during commissioning of the equipment.

During commissioning, the OEL is drawn such that it overlaps the IEEE/ANSI C50.13 rotor thermal limit.

In addition, the following limiters are typically represented:

Excitation systems manufactured by Reivax include a dynamic capability curve that can be used to monitor operating conditions in real-time. An example of such a capability curve is shown below. 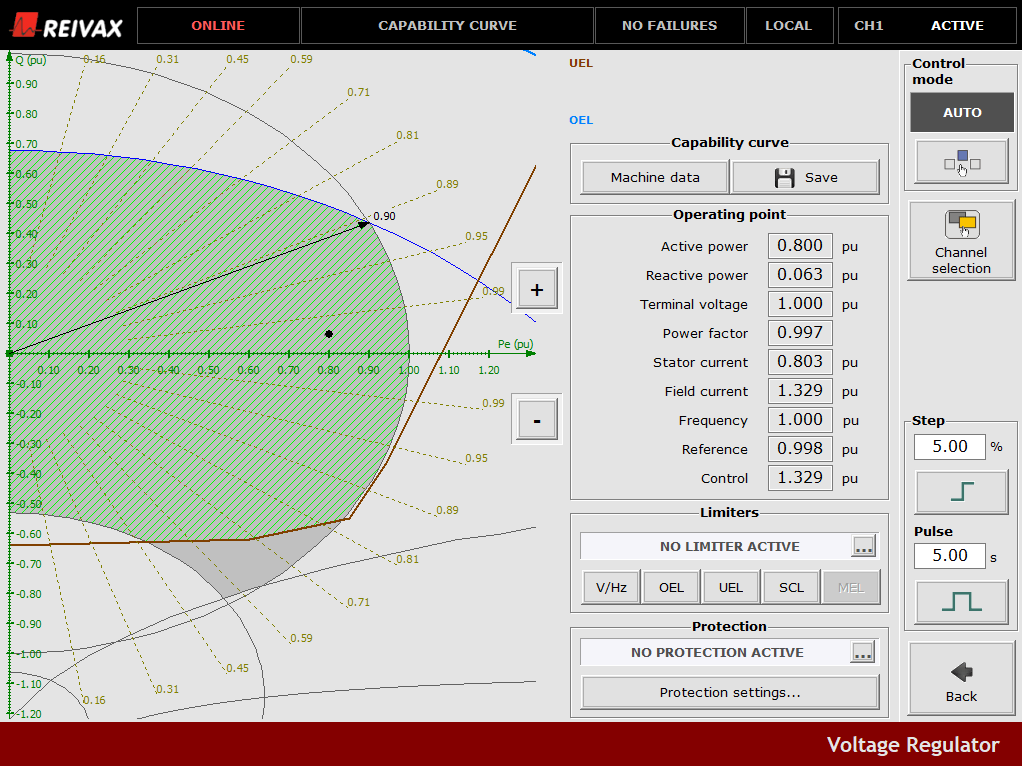 The Power System Stabilizer (PSS) is an add-on to the control loop of an excitation system that improves system stability by compensating for low frequency (0-5Hz) oscillations in the power system. This translates into a more stable generator output power, which can lead to significant savings due to reduced power losses. Power System Stabilizers offer superior cost effectiveness and have been found to produce millions of dollars in annual benefits for large utilities.

The PSS output is added to the AVR control loop. The image below shows the PSS summing junction as it appears on the transfer function of a Reivax excitation system.

The graph below shows the response of a 32.5MW utility-scale generator with and without the PSS. A disturbance is introduced at the 2 and 12 second marks. The transient and steady-state stability are noticeably improved. Without the PSS, oscillations continue for about 10 seconds after the disturbance, whereas they are damped almost immediately when the PSS is turned on.

Different types of excitation systems have emerged over the years in the power industry. They are classified into two general categories, depending on the power source, rotating exciters and static exciters.

A single-line diagram of an AC rotating exciter is shown below.

In a DC excitation system, the power rectifier supplies an intermediary DC exciter, which in turn supplies the field winding of the synchronous machine.

A single-line diagram of a DC rotating exciter is shown below. 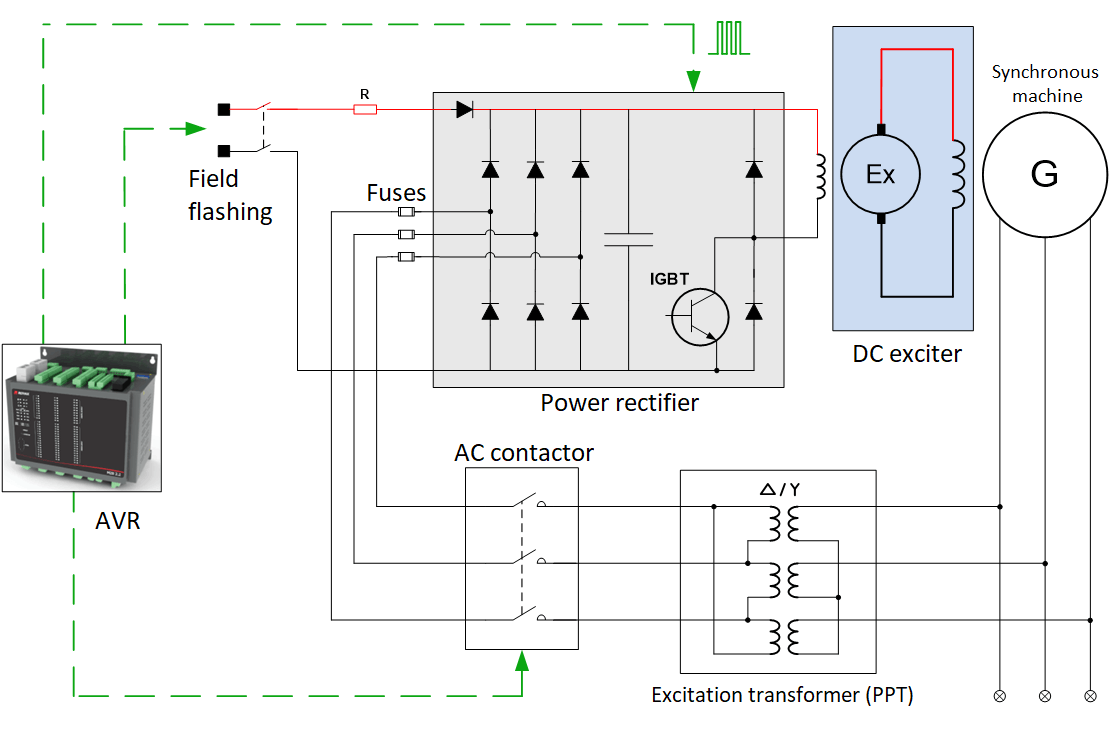 In static excitation systems, the power rectifier directly supplies the field winding of the synchronous machine. There is no pilot exciter.

A static excitation system is terminal-fed (also called bus-fed) when the supply is taken from the machine itself through a power potential transformer (PPT). The primary of the PPT is connected to the stator of the machine and the secondary supplies power to the rectifier.

Static excitation systems are not inherently self-exciting, so they require an external supply to jump-start the excitation process and build up sufficient magnetic flux. This process is called field flashing. 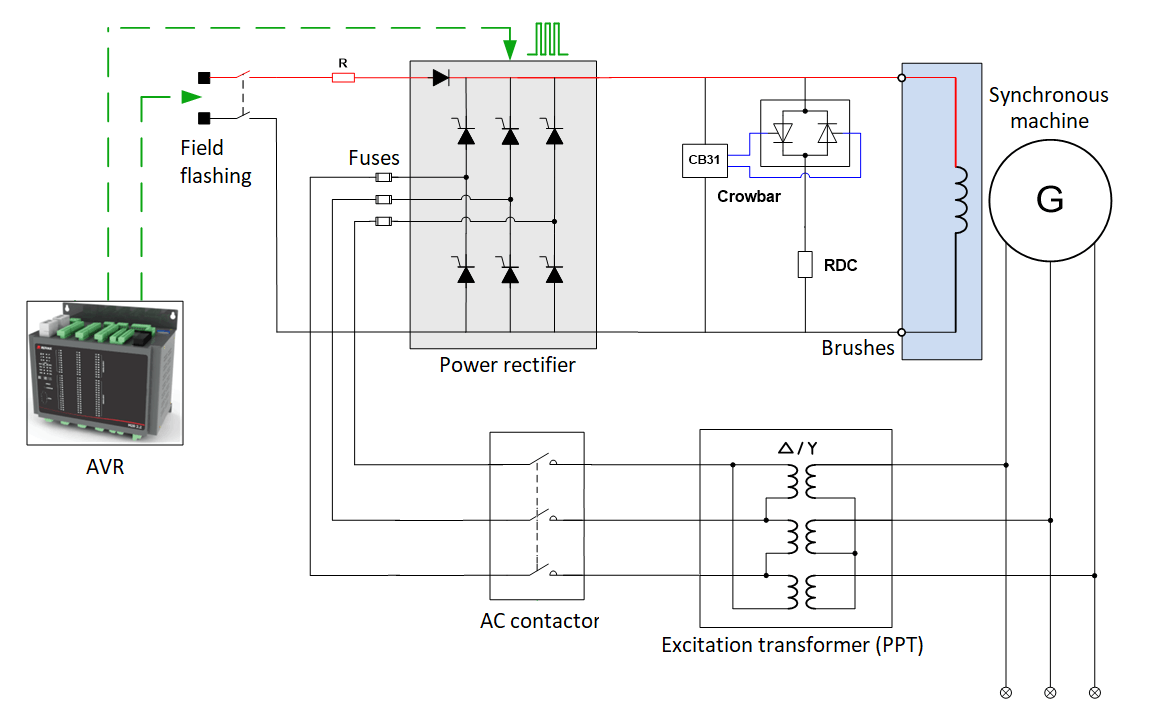 Static excitation systems provide a number of benefits that make them an attractive option for synchronous machine control:

The main components of a static excitation system are listed below:

The main elements of an AVR are as follows:

Redundant control solutions are common. In a redundant configuration, there are two voltage regulators, one that executes the control functions while the other is in hot standby.

Heat generation is a concern for the power rectifier. For bridge cooling, redundant fan sets are typically provided.

Redundant bridge configurations are common. In case multiple bridges are present, the excitation system will perform current equalization to balance the bridge outputs.

The converter interface consists of all intermediary devices between the controller and power rectifier. It converts the control signal to firing pulses and isolates the control electronics from the power section.

On excitation systems manufactured by Reivax, diagnostics tools for monitoring the power rectifier are provided on the HMI. The status of fans, fuses, and semiconductor temperatures can be checked in real-time, as shown below. 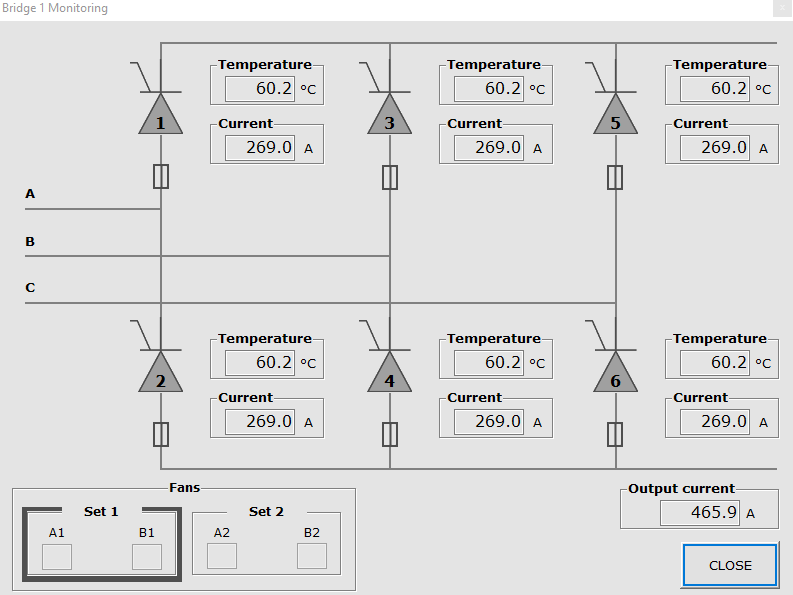 This screen demonstrates normal bridge operation. All 6 thyristors are conducting normally. Current is equally balanced between the 3 branches. Fan set 1 (A&B) is active, while fan set 2 is on standby. 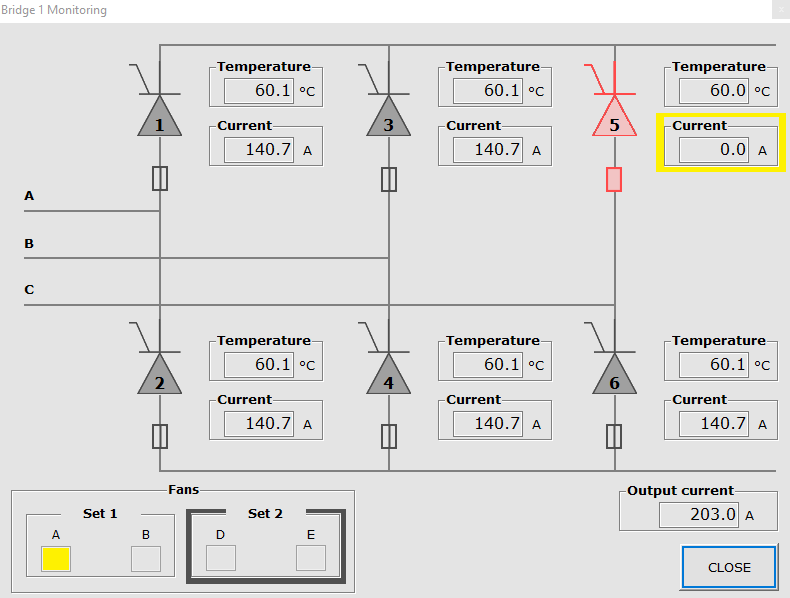 In this screen, the HMI is indicating a problem with fan A. As a result, the exciter has automatically transitioned to fan set 2 (D&E). There is also an indication of a fuse problem with thyristor #5. The measured current through this thyristor has dropped to zero, indicating that there is no conduction.

The PPT is a 3-phase step-down power transformer used in static excitation systems. Its purpose is to step down incoming AC voltages from the synchronous machine to a level that can be supplied to the power rectifier.

The main purpose of the field breaker is to interrupt the excitation and serve as an isolation point for performing maintenance and troubleshooting.

Both AC and DC solutions are common. The field breaker can be installed either directly in the field circuit, or between the secondary of the excitation transformer and the rectifier of the system. In the latter case, the breaker is often called an AC contactor instead.

The field flashing circuit is used in the start-up process, when the magnetic flux in the generator is too low. The field of the synchronous machine is temporarily connected in parallel to an external DC supply, such as a station battery, until the synchronous machine develops enough terminal voltage such that the excitation becomes self-sustaining. Afterwards, the field flashing is interrupted.

The crowbar is a safety feature designed to protect the excitation system and field winding from external surges, generator pole displacement, etc.

If you would like to discuss these features with a qualified engineer to better understand the advantages, please call our toll free number 1-877-7REIVAX.

All the Latest News & Cases

REIVAX is awarded a GE SILCOmatic excitation system retrofit Montreal (Dec 17th, 2021) – REIVAX NORTH AMERICA is pleased to have been awarded a contract to replace…

read more
PLEASE COMPLETE THE CONTACT INFORMATION BELOW AND WE WILL GET IN TOUCH WITH YOU ASAP.
Join REIVAX
Login to REIVAX
Reset Password
Enter the username or e-mail you used in your profile. A password reset link will be sent to you by email.

Please fill out this form to be able to receive a quote within 24h.